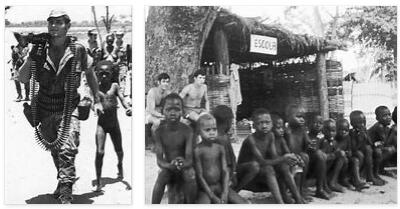 The present area of ​​the country Guinea-Bissau was settled by humans in the Stone Age. They lived as hunters and gatherers before they became sedentary farmers.

One of the great West African empires of the Middle Ages, the Mali Empire, influenced what is now Guinea-Bissau. In the 13th century it became a province of the Mali Empire under the name Kaabu. When the Mali Empire lost power, Kaabu survived and became a Mandinka kingdom in 1537. Gabu became the capital.

The first Europeans came in 1446. It was Portuguese seafarers who explored the coast of Africa. They were soon followed by traders who set up bases and, above all, took slaves with them to Europe.

In 1614 Portugal founded a colony administered by Cape Verde (an archipelago in the Atlantic). In 1765 another colony was founded in Bissau on the coast, which became the center of the slave trade. In 1836 Portugal banned the slave trade.

In the 19th century, as a follower of Islam, Fulbe fought against the West African empires, which adhered to the ancestor cult and the animistic religion. The Kaabu troops were finally defeated in 1868 and the empire fell.

In 1879 the colony of Portuguese Guinea was founded. It was separated from Cape Verde. In 1886, Portugal and France established the borders of their colonies – Senegal and Guinea were French colonies. Native peoples fought against the colonial power until 1915, when they were finally subdued.

In 1951, Portugal named all of its previous colonies “overseas provinces”. Portuguese Guinea also received a certain amount of self-government. The inhabitants could become equal citizens of Portugal if they abandoned their own culture, spoke Portuguese and converted to the Catholic faith. Few people became these so-called assimilados. In 1961 this regulation was abolished again.

The dictator ruled Portugal refused to divorce his “overseas provinces” to independence, as France and the UK since the 1950s dismissed their colonies. The PAIGC party was founded as early as 1956 and worked together with Cape Verde for independence. Their leader was Amílcar Cabral.

In 1963 a guerrilla war began against the Portuguese colonial power. In 1972 most of the country was under the control of the PAIGC and they held elections. Cabral died in an assassination attempt in January 1973. On September 24, 1973, Guinea-Bissau was declared independent. After Portugal’s government was overthrown in the Carnation Revolution, Portugal recognized independence on September 10, 1974.

History of Guinea-Bissau from independence until today

The first president of the country was Luís Cabral (half-brother of Amílcar Cabral). The PAIGC was the only legal party in the country. The building of a socialist state began.

In 1980, Cabral was overthrown in a military coup by João Bernardo Vieira (Prime Minister since 1978). The union of Guinea-Bissau with Cape Verde, which had been planned up to that time, has now been abandoned. In 1984 a new constitution was passed.

With the end of the Cold War and the dissolution of the Eastern Bloc, Guinea-Bissau broke away from its previous economic policy. From 1991 onwards, other parties were allowed. Vieira won the 1994 elections.

In 1998 the army rebelled against Vieira and civil war broke out. Many people died, others fled and then lived in camps outside of Bissau. Houses and streets were destroyed. The previously difficult social and economic situation was made even worse by the civil war. In May 1999, Vieira was overthrown.

In 2000, elections finally brought Kumba Ialá to the head of the state. It was overthrown in 2003. Transitional governments began their work. From 2003 to 2005 Henrique Pereira Rosa was President of the State.

Drug trafficking is a major problem in Guinea-Bissau, a country located in Africa according to militarynous. Drug traffickers from Latin America used the country to smuggle cocaine into Europe in particular. Between 2004 and 2007, Guinea-Bissau was a hub for smuggling, then drug trafficking decreased, only to pick up again from 2012.

For the presidential elections in 2005, Vieira, along with other candidates, ran again and was elected. The situation remained unstable, there were coup attempts and murders. On May 2, 2009, Vieira was murdered by the military.

Malam Bacai Sanha has now become president. He was able to avert a coup attempt in 2011. However, his health was in poor health and died while hospitalized in France in 2012.

Umaro Sissoco Embaló has been President of Guinea-Bissau since February 2020. He won in the second ballot, although he was behind his rival Preira in the first ballot. He swore himself in against the will of Parliament. ER is still controversial, as is the prime minister he has appointed.