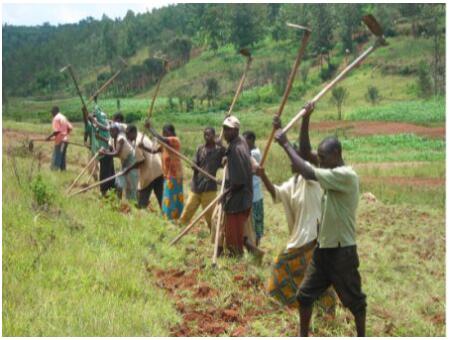 In Burundi more than 90% of the population live from agriculture, the majority of which is subsistence farming. Burundi’s agriculture is not very productive and has to deal with a number of limiting factors. Production has increased overall in recent years, but due to population growth, subsistence farming and little technology in agriculture, fewer people now have enough to eat than before, ie per capita production has fallen.

According to extrareference, the country can be divided into different agricultural zones, depending on the climatic and soil ecological features. The main crops are bananas, cassava, corn, potatoes, sweet potatoes and rice. Coffee and tea are mainly grown for export. The cultivation of cotton has been greatly reduced in recent years. Burundi’s agriculture is hardly diversified. Since the generation of foreign currency is one-sidedly dependent on the main export product, coffee, the Burundian economy feels the price fluctuations on the world market directly. The tea cultivation is in recent years – as in Rwanda – important, but can be on the world market hardly claim. Coffee and tea are mainly grown on a small scale. The tea industry was already considering privatization shortly after 2005, but still had teething problems, while much greater progress was made in privatization in the coffee sector. In 2019, however, the government rowed back again: Due to transparency problems, the re-nationalization of coffee is likely in the near future. Coffee is the country’s main export product – 80% of its export is made up of coffee. Overall, export agriculture is fragile in terms of its production and sales figures due to natural but also politically difficult situations.

The natural conditions of agriculture usually allow two harvests a year, but due to climate change, increased periods of drought in eastern Burundi and the sometimes only moderately fertile soils, overall production remains low. Diseases of individual crops such as bananas or cassava, the rise in food prices in recent years, heavy rainfall and inflation endanger production and further worsen the nutritional situation of the population. Agribusiness is hardly common. Wherever cultivation is worthwhile due to climatic and soil-ecological conditions, soil erosion or poor infrastructure for selling surplus products are often limiting factors in agriculture.

The agricultural area per resident is decreasing. This problem will become even more acute in view of the high population growth. The food production is made more difficult not only by natural inhibiting factors but also by regional conflicts and the return of refugees. The diet of the population is a growing problem, especially in the rural areas. Around a third of the population is constantly threatened by hunger. The consequences, especially for children under 5 years of age, are dramatic – healthy development is severely affected. Possible solutions are, for example, the integration of fish farmingin to the rural production system or increased chicken production. But here too there are problems when diseases occur. Attempts have been made for a number of years to increase agricultural production through subsidies with chemical fertilizers – criticism of this type of production increase has, however, been voiced by those who see organic farming as the only long-term effective alternative.

The galloping population growth makes it imperative to find new ways in agricultural production to produce enough food for the Burundian population in order not to become completely dependent on external food supplies. Above all, it is important to find suitable means to better meet the changed conditions caused by climate change. There are links between agriculture, the environment and conflicts. Only if we succeed in investing in agriculture and permanently nourishing the population can conflicts be reduced and the environment protected.

Overall, only around 2% of the population is employed in industry. Mining is based on the extraction of small amounts of gold and cassiterite, a tin ore. Significant deposits of uranium, nickel and peat have not yet been economically exploited, although larger deposits of mineral resources are suspected. But that is set to change in the future: From 2018, Burundi will increasingly focus on mining in its economic policy. In 2019, the focus on strengthening mining has already paid off: the foreign exchange generated through the export of minerals has exceeded the income from tea and coffee export. The EAC’s partners are primarily Europe, China and countries, with Rwanda playing a special role. Cooperation with Rwanda in the field of mining was planned, but against the background of the current tensions in both countries, it has moved into the distance.

The processing industry in Burundi is largely limited to the production of agricultural products, among which the beer industry has a high status or is of economic importance. Other products include textiles, sugar made from sugar cane, cement and insecticides. The industry suffers mainly from the infrastructure problem and from the lack of energy, which makes continuous and lucrative production impossible. To this day, potential investors shy away from the political uncertainty in the country, stability and security are fundamental requirements for dynamic industrial development.

The service sector is important for the Burundian economy with around half of the generated GDP, but only around 4% of the population work in the field of services. In addition, the informal sector can be described as essential. Although Burundi has a diverse natural area with overwhelming flora and fauna, tourism is little developed due to political instability and infrastructural deficiencies. However, the government is trying to make potential tourists aware of Burundi, for example with a visually attractive website for the official tourism authority and with advertising at the annual ITB in Berlin. Investments in tourism should boost the economy. The country is also sent by Film shown. It is an attraction to be able to offer a country that is still very original. The infrastructure in the national parks and nature reserves is slowly being rebuilt, but the tourist still has to be prepared for many unpredictables. The three largest national parks lure with a still untouched nature, one could speak of an ecotourism here. There are now some upscale hotels and restaurants in Burundi, most of them in Bujumbura or in the vicinity of the national parks. The museums, the Islamic cultural center and the excellent market in Bujumbura are also worth a visit. Lake Tanganyika offers a variety of water sports and recreational opportunities. Other attractions are the ancient royal cities of Muramvya and Gitega.